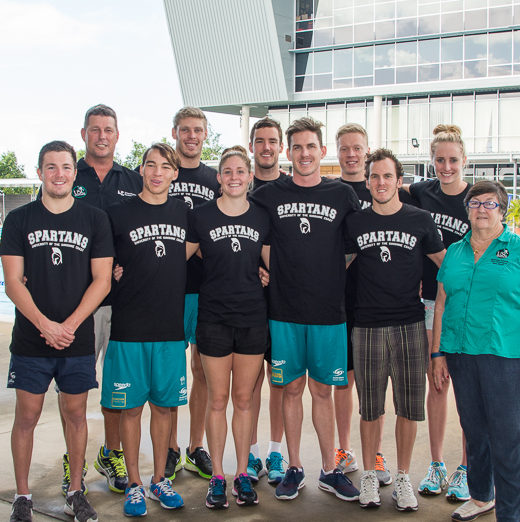 This is a remarkable achievement for the Spartans, led by Olympic coach Chris Mooney and Paralympic coach Jan Cameron, who have only been officially training as a team at the University’s pool for one year.

Mrs Cameron and the team recognise that an achievement such as this can only come from the great opportunity that the team has received from the University of the Sunshine Coast.

“The support and opportunities that USC has provided in such a great environment, led by Brendan Burkett, have made a huge difference to the group.” Mrs Cameron said.

“The staff, the facilities and the swimmers all combine together to give us a great culture and opportunities to achieve.”

Many doors have been opened for a debut Paralympic swimmer of the Spartan team, Jacob Templeton, who has been offered a $1,000 bursary for his Bachelor of Sport and Exercise Science.

“I’ve put in a lot of effort at uni and to be acknowledged is special,” Mr Templeton said.

The same could be said of University of the Sunshine Coast graduate Chloe Grabs, who has recently given an outstanding performance in the World University Archery Championships which were held earlier this month.

“It is a lot of work to manage sport and study but I’ve embraced it. Many of my tutors in the Sports Science program came from a high-performance sport background, so they knew what I was going through.” Miss Grabs said.

The University of the Sunshine Coast offers its students many sporting activities and teams to be involved in, as well as a chance to expand their networks and experiences through various clubs and societies.

“The Sunshine Coast is a natural playground when it comes to sports, music and culture which provides plenty of options for students to get involved in activities while they study,” Mr Molloy said.

“It is well recognised on the Sunshine Coast amongst education providers that there must be a balance between study and extracurricular stimulation for students so that their overall experience is an enjoyable and memorable one.”

Students of the University of the Sunshine Coast acknowledge the potential that these offerings provide and the journeys of the Spartan swimming team and Miss Grabs are just a few examples of students taking full advantage of the possibilities of taking on an extracurricular activity as part of their studies on the Sunshine Coast.

Anyone interested in exploring the opportunities available through the University of the Sunshine Coast are encouraged to visit their website www.usc.edu.au or call Student Central on 07 5430 2890.

An initiative of Sunshine Coast Council, the regional Education and Research Industry Taskforce and the newly formed Education Sunshine Coast, the Study Sunshine Coast portal (www.studysunshinecoast.com.au) aims to introduce the 300,000-plus international students who come to study in Australia to the Sunshine Coast and help keep more local students at home for their tertiary education.