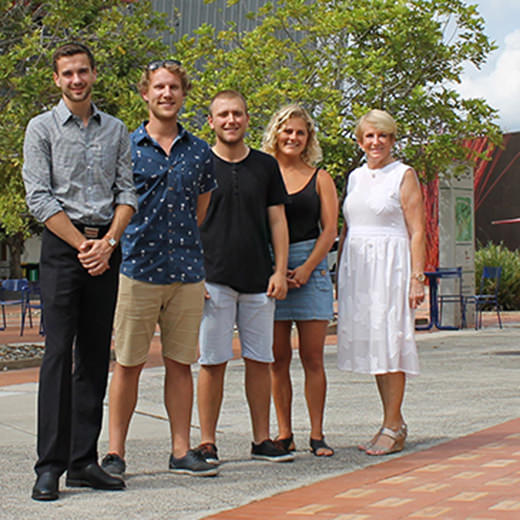 Hundreds of University of the Sunshine Coast alumni will this week officially unveil a special pathway on campus that demonstrates their pride in USC and willingness to help future students.

The University’s Graduate Walk initiative features the names of 400 alumni etched into pavers that have been laid near the Library as part of an enterprising fundraising project to support USC students in financial need.

Many of the graduates, accompanied by family and friends, will return to their alma mater from across Australia at 4pm on Friday 26 February for the event. Donations of $200 for each paver raised $80,000 for USC Study Support Bursaries.

USC Alumni Relations Officer Anita Edmonds said every graduation year of USC’s history was represented in the pavers, alongside the 100 different degrees that spurred the students to careers around the world.

“The project was designed to recognise graduates and inspire future students as the Coast’s own University turns 20 this year,” she said. The celebrations will extend into the evening with the awarding of an honorary doctorate to renowned science commentator Dr Karl Kruszelnicki and the launch of USC’s anniversary book.

Ms Edmonds said the biggest single supporter of Graduate Walk was philanthropist Jocelyn Walker, who bought 12 pavers for past recipients of her family’s annual Vic Walker Memorial Scholarship as well as family members.

Among those returning to USC will be:
• Dr Zac Turner, 2009 USC Biomedical Science graduate and former Navy officer who went on to complete degrees in medicine and surgery at the University of Sydney and now works in cosmetic medicine;
• Adam Madill, 2000 Business (Management) graduate who is now business logistics manager at Madill Motor Group in Gympie/Noosa;
• Chris Thompson, 1999 Business (Information Systems) graduate and Sunshine Coast Deputy Mayor.
• Chris Raine, 2009 Arts/Business graduate and founder and CEO of Hello Sunday Morning, an online program aimed at helping to reduce binge drinking.

The launch will be introduced by USC Development Office Director Russell Ousley and feature speeches by graduate Bill Darby and a USC Study Support Bursary recipient.